End of the Revival Tour!

September 27th is the last day of “The Great Hope of the Territorial Revival” or, as we call it, the Revival Tour.

This tour, aimed to the support of the victims of the 2011 Tohoku Earthquake and Tsunami, started in Ichihara (Chiba) on July 2nd, and went on through a total of 19 shows in 15 cities, the last one being Sendai, the host of the Triumph Concert. 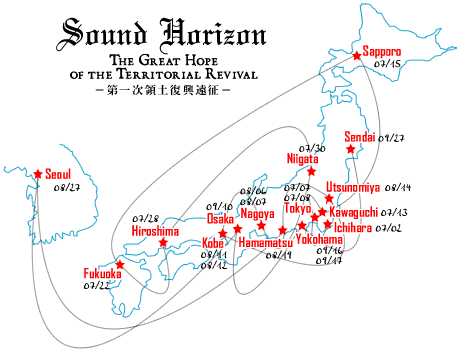 And here are some fun facts about the tour:

Curiously enough, 19 is also the number of arrows (→) that appear in the lyrics of the Opening Theme song, Revive.

The number of artists involved in the tour (singers, musicians and narrators). Unlike the 3rd Territorial Expansion, this tour featured 5 singers each show, with the exception of the two shows in Yokohama, which featured 6 and 7 singers, and the Triumph concert in Sendai, which featured the whole cast.  Minami Kuribayashi, Mikuni Shimokawa, Joelle, Ceui and MIKI have been the busiest singers during this tour with a total of 9 shows, followed by KAORI, Jimang, REMI, YUUKI and Haruka Shimotsuki with 8 shows, and Kanami Ayano, Azumi Inoue and RIKKI with 7 shows.

This tour offered a total of 85,138 seats. If we assume that all the shows (or nearly all the shows) were sold out, that would be a rough approximation of the people who attended it!

A total of 61 different songs have been performed during the tour. This includes all Märchen (except for Garasu no Hitsugi…), Ido e itaru Mori e itaru Ido, 10 songs from Moira, Seisen no Iberia, all Roman (except for Norowareshi Pierre and Yorokobi to Kanashimi no Vin, both songs by REMI), 7 songs from Elysion, 3 songs from Lost, 3 songs from Thanatos, 3 songs from Chronicle 2nd, 4 songs from other releases, 5 live only songs, and 3 new songs (the anthem Revive, Idolfried’s song TNG, and the instrumental piece Prayer).

All tickets for this show had the same price (6,900 Yen) with the exception of the two Yokohama Arena shows (which were 7,400 yen) and the Triumph concert in Sendai, which was free. A rough approximation of the gross revenue of this live is 606,639,900 Yen (about 7,940,310 US$) but, of course, the net income would be much much lower, and a portion of it will go to the Japanese Red Cross to support the Earthquake and Tsunami Relief in Japan.

The date when the “1st Territorial Revival Tour MEMORIAL ISSUE”, a photobook featuring images (and more?) from the whole 2011 tour, is rumoured that will be released. There is no official information yet, though!

…And that’s about all we can say about this amazing tour. We, the unfortunate overseas Laurants, didn’t have much chances to attend it (excepting Korean Laurants, who rejoiced the first SH show outside Japan this August, and some really-lucky travellers), but we still can thank the amazing crew of Sound Horizon for being so awsome by taking part in our ongoing fan projects, which this time will be in collaboration with Japanese Laurants, under the name of All Laurant Project! Be sure to check our special page.