In a similar fashion to 7th Story Märchen back in 2010, the tracklist of the new album is being gradually revealed through a riddle.

While the tracklist of 7th Story Märchen played with the symetry of the song titles, this time the names of the tracks form the shape of the number 9.

Every day, a new character is added to each end of the title, thus closing the gap in the shape of the number 9. 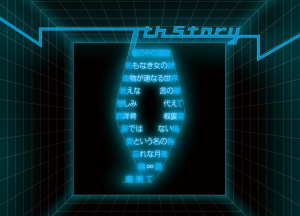 The image can be found in this page of the Sound Horizon 10th Anniversary Special Site.

The revealed song titles translate as:

9th Story CD “Nein” is the first full length album by Sound Horizon in over 4 years. You can check the cover art and the full list of singers and musicians involved in the album, and you can also follow the links below if you would like to preorder it on CDJapan.

Previous postListen to "Ori no Naka no Hakoniwa", the main song from 9th Story CD Nein! Next post9 days for the 9th Story: What do we know about the new album?